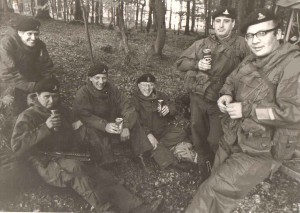 Our latest personal account come from Major Martin Long who joined the Suffolk and Norfolk Yeomanry (as 202 Battery) in 1970 and was subsequently to become Battery Commander.  Here is the first part of his memories which are of when he joined the Battery.

“I joined the Battery in February 1970 as a result of a advertisement placed in the East Anglian Daily Times. I went to the Drill Hall at Bury and was interviewed by Capt Bowden. I subsequently was attested by Major Makin. 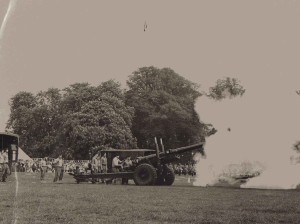 At the time the Battery was still shaking down following the mergers of the various regiments to a single unit. There was seemingly a huge number of soldiers in the battery and places on gun crews were keenly sought. There was a large pool of spare bodies for all the other tasks that the unit had and some of the tasks were none too pleasant!  At that time the battery also had elements of the Essex Yeomanry attached who seemed to provide an extra OP party when deployed. The Drill Halls were Norwich, Swaffham, Ipswich and HQ was at Bury in the Kings Road old Cavalry Barracks which were very well equipped though the narrow entrance archway meant that drivers of the gun tractors had to be careful going through.

The battery was equipped with 5.5 inch medium guns which fired an 82 pound shell with a range of 15 kilometres at maximum. The gun towers were Leyland 6×6 Artillery tractors which had a crew of 10 wit 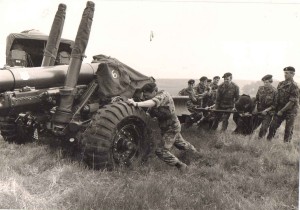 h two drivers. The battery also had a Leyland Cargo wagon and a Thornycroft 10 tonner as spare hooks/ammunition carriers. The stores had three Bedford QL’s , one of which was used by the attached REME gun fitter team which were based  at Regimental Headquarters at Grove Park in London. The seemed to come
out on every firing weekend and had a team of gun fitters and vehicle mechanics. Two further QL’s were used as the command post vehicles. These had banks of batteries to support the radio sets they carried. The rest of the vehicles were Land Rovers of the long and short wheelbase varieties. 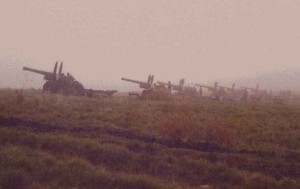 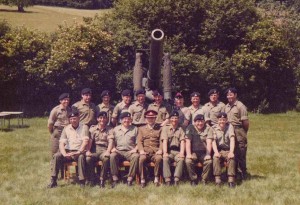 WO2 Gay and there  was a Sgt PSI whose name escapes me. Both came from 49 Regt RA which was the Battery’s a
ssociated regiment as it recruited from East Anglia. In time of war, 202 role was to provide an addition battery to 49 Regiment and to augment the regiment’s shortfall to full the orbat and that is perhaps the reason why the Battery was able to recruit and retain numbers well above the established needs. The Admin Officer based at Bury was Col. J Wilson and the Clerk was Mrs J Galvin.

Initial training was done at weekends at Bury covering Drill and weapons and army basic training. This was done by the Battery SNCO’s. It was on one of these weekends that I first met Gunner Gary Walker from Swaffham. The combat issue was plain khaki (the DPM was only then being issued to the regulars) and we also proudly had green neckscarfs to distinguish us from 200 Battery (Red) and 201 Battery (Maroon). Headquarter Battery (the unspeakable) wore Blue scarves and the LAD wore Yellow.
Though living in Ipswich, there was no room to join the detachment there so I was allocated to Bury on D Sub. Sgt Darling, the number 1, was seemingly always away working. (He installed radars on airfields for Marconi at Chelmsford) so the coverer Bdr Chris Coady looked after the gun and crew. Drill nights were spent on gun drill and cleaning the gun.  Drill was deploym 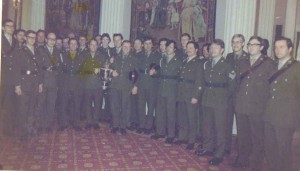 ent and recovery procedures and duties in action. It was important that every member of the crew could do each job on the detachment including laying the gun. QA lot of time was spent training on the various elements including basic maintenance of the weapon. The Bury gun was of the welded trail type which made cleaning it a great deal easier than the other battery guns which had the riveted trails which had lots of nooks and crannies for the dirt to gather.. The Bury gun is now displayed at the Imperial War Museum at Duxford, though incorrectly deployed! The gun was also a bit heavier as a result of the trail, a small price to pay for the ease of cleaning.

Weekends were at that time rather leisurely affairs with parade at the drill halls at 12. and move out to the Stanford area at 13.00. On arrival at Wretham , West Tofts or Bodney camp, there would be a full sight test and maintenance possibly followed by a couple of dry deployments. It was then back to camp for tea. The battery always fed very well and was well know for this in the Regiment. Sunday would see an early start for deployment and live firing would commence as soon as possible after 9 when the range opened. Firing would finish typically by midday whereupon lunch was served and the Battery was sent back to drill halls at 3 which meant you could be home and washed by 5! It was all very civilised.” 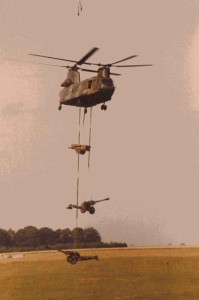 Thanks Martin for your account and we look forward to hearing more of your memories about your career in the Suffolk and Norfolk Yeomanry.